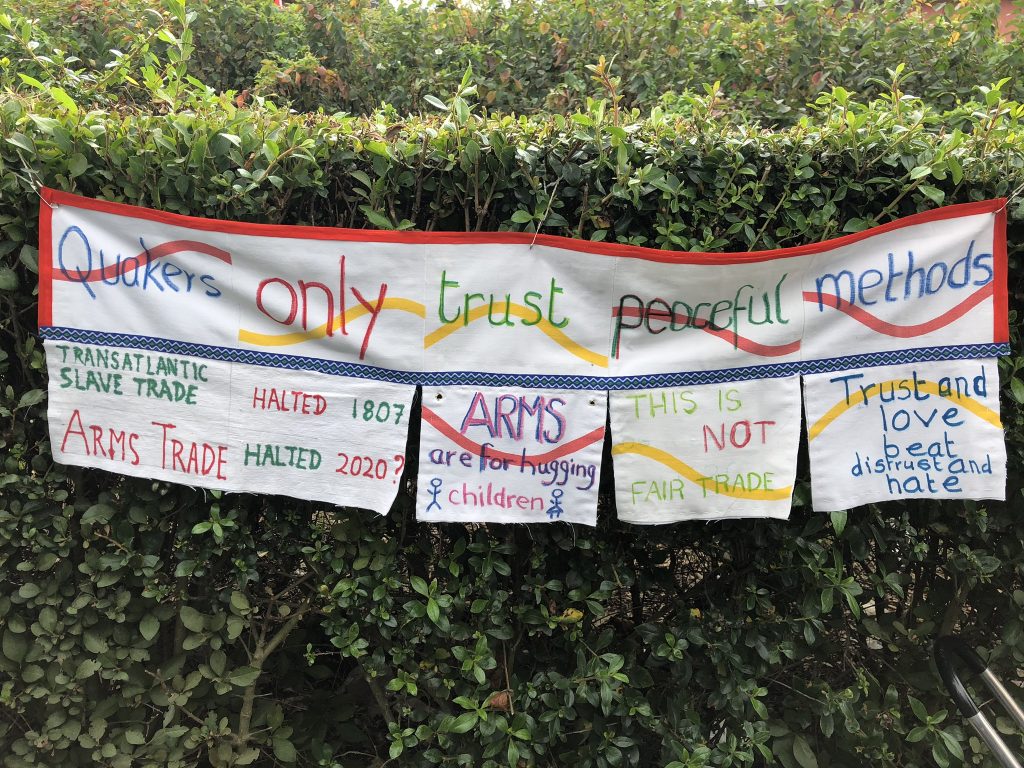 Roots of Resistance is a community of Friends who prepared to take creative, vibrant, nonviolent action to resist the Defence and Security Equipment International (DSEI) arms fair, alongside other faith groups on Tuesday 3rd September, at the Excel Centre in London. The strategy was to target the set up of the fair (or the “unfair”) in the week preceding the event. The three key elements to the action: meeting for worship, a collective Quaker “craftivist” tapestry and protest singing.

Friends gathered for a briefing in The Light, at Friends House, on the Monday. A table laden with mini-banners waiting for hole punching; another with yellow “bust” cards for us to carry, with legal advice following arrest; diligent singing practice (twice!); questions and answers (including the vital loo information!); Friends from far-flung meetings being greeted by their overnight hosts.

Then, on Tuesday, a steady stream of easily identifiable Quakers flowed from the Prince Regent station of the DLR to the East Gate of the Excel Centre.

We sat on the tarmac, blocking one of the main entrance roads. Three people had “locked on” much earlier in the day and were lying stretched across the road, with a great bustle of yellow jacketed police above and around them, as operatives worked to prise the protesters from the road. As our Meeting for Worship commenced, the silence was punctuated by the whine of the metal saws and, when eventually a person was “released” from the lock-on, arrested and led away, we clapped and cheered.

A bird sang in the treetops – a pure melodic sound, contrasting with the roar of the jets overhead leaving London City Airport. A Friend ministered that the single bird wasn’t drowned out by the larger force but sang on.  We too sang – a series of gentle angry words carried on the wind – and waved our banners and flags in the breeze.  The adjacent hedges and fences were festooned with the mini-banners made by many different Meetings.

Children played amongst us; a troupe of clowns gambolled gleefully and brought smiles to all but the dourest of the police present. Bright blue Quakers for Peace T-shirts punctuated the scene. The sun shone and the sky was blue. At times it felt like a carnival and you could forget the reason for being there.  But then the deep rumble of the trucks threatened us and the police pressure became intense as they tried to corral us on the pavements.  Undaunted, Friends crossed and re-crossed the road until the police ran out of minders and a new blockage was created and the giant trucks had to turn back.

The second Meeting for Worship, beside the main roundabout, was larger and tension increased as the initial community police warnings (“You are warned that you are blocking the public highway and are therefore liable to arrest. You have been noted”) became arrests and people were led – or dragged – away. One elderly Friend, her cardboard banner proclaiming “Stop helping wars Stop selling arms”, beamed at the arresting officers, feeling this to be a culmination of her long protest over many years.

It was a long day for some of us and a tiring one. But SO worth the effort. 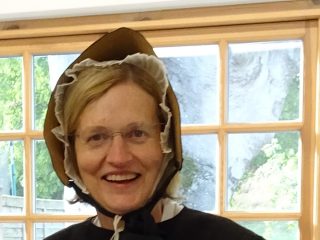 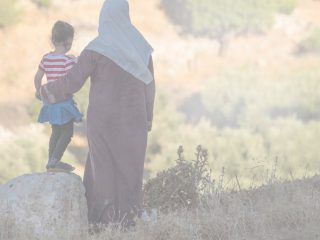 Next Post (n) Eyewitness - stories from Israel and the West Bank