When we try to unpick what we understand by the terms ‘Quaker Theology’, the clearest exposition of what is involved (at least as it is normally accepted)is provided by Robert Barclay, a contemporary of George Fox, who lived 1648-1694 and was probably the closest Quakers came to being a ‘systematic’ theologian. Barclay wrote An Apology for the True Christian Divinity, which was written in Latin and published in 1676. Fox and Barclay shared similar ideas, and their ‘founding belief’ was that each person can have a direct experience of God, since there is something of the Divine (often called ‘the Light’) in everyone. Barclay believed that personal salvation came through the transformation of the self and it begins here and now, rather than resulting from faith in Christ’s atoning sacrifice for our sins which occurred at our death/the Last Judgment. This means that to Quakers, sacraments are unnecessary.

Quakerism has always been quite critical in its attitude to Scripture, regarding it as metaphorically rather than literally true for much of the time. And because everyone can experience God and has something of the Light within, all are equal, so there is no need for priests or creeds or early traditions. This should in theory mean that tolerance of the beliefs of others is more or less mandatory, but unfortunately Quaker history shows that things didn’t always work out that way, and thus we find plenty of divisions and exclusions taking place. Nevertheless, tolerance remains a Quaker ideal, even if not all attain it.

So, to sum up, in essence the Quaker world-view opposes hierarchy and authority and supports multiplicity and personal experience. Catholics have traditionally believed in the authority of the ecclesiastical hierarchy and Patristic tradition, and Protestants have tended to maintain the authority and inerrancy of the Bible, whereas Fox and Barclay instead stressed the primacy of the Spirit, which is active inside us, guiding us and leading us to true righteousness. Although some Protestant groups such as Calvinists have also stressed the transforming power of the Spirit, they believed that this belonged to the early days of the church. The 2nd century was the end-point. This meant that it was more or less impossible to attain true righteousness on earth. Humans were innately and utterly sinful, so that God in his grace had generously ‘imputed’ Jesus’s righteousness to a very small elect few, who were saved by it. The rest were damned.

Quakers from the first rejected the depressing conclusions of the Calvinists and maintained that revelation/transformation had not ceased; it was ongoing and it directed our conduct through the continuing activity of the Spirit if we listened to it. Moreover, since Jesus had died for everyone, not just a tiny elect few, there could be no elites and all were equal. This meant that women as well as men could preach and minister. And since, as I noted above,  the transformation of the self , which was the core of how early Quakers understood ‘salvation’, was experienced here and now if we follow the guidance 0f the indwelling Light within, and this was available to everyone, Quakerism is a truly universalistic faith. So Quakers do not necessarily have to be Christians, even though all early Quakers were.

This is a very brief summary of the fundamental elements of Quaker theology. I shall examine two aspects of it in more detail and we can then discuss them.

Theology literally means ‘words about God’. Most Quakers share a belief in what has traditionally been termed ‘God’, even if many prefer to refer to this in other terms. The term implies the existence of a Supreme Being, or Life Force, or Light; something outside ourselves which can influence and direct our lives.

This term means ‘words about Christ’. Christians believe that this eternal, governing, creative power has been made known to us directly in a uniquely personal way through the life and teachings of Jesus of Nazareth. And Jesus’s experience of God, his revelation of God via his teaching to his followers, showed us the sort of behaviour God expects, so the ‘moral imperative’ was inherent in Christianity from the outset. Historically, Jesus’s teaching led to a major clash with the authorities of the time and precipitated his execution and death, but he passed on his experience and knowledge to his followers through the transmission of the Holy Spirit, a power mediated to them and shared by them.  Quakers take this further and say that this divine Spirit is present in everyone, even if it was Jesus who first made it known. And this experience of God within us is not something passive; as a correlative, it requires us to testify to it and mediate it in our turn through our behaviour (so the moral imperative remains).  ‘Good works’ or ‘fruits of the Spirit’ are crucial, not only because they are desirable in themselves but because they testify to the Spirit and its presence in us. They are a litmus test, so how we behave really matters. Quakerism has ever been firmly grounded in the real world lived in by believers.

As the early church spread, many centuries were spent trying to differentiate between what was seen as ‘the two natures’ (human and divine) manifested in Christ. Christians also tried to explain how these were to be related to the eternal God and how they fitted together. This means we find all those discussions on the Trinity and all the early Creeds as they struggled to define their beliefs, sublimely convinced that they were right. Anyone who thought differently tended to be labelled ‘a heretic’ to be excommunicated forthwith.

What Christians have done over the centuries is to conflate the two elements evident in the New Testament: the human Jesus, a 1st Century Jew, and the eternal Christ, which in the Gospel of John is termed ‘The Word’, co-existent and co-eternal with God, and which became incarnate within his own creation in the human Jesus, immanent afterwards via the Spirit. But there is also a third strand in the New Testament – a ‘doctrinal’ aspect especially emphasised by Paul. This focuses on Jesus who died as an atoning sacrifice for our sins, who rose physically from the dead and ascended bodily into heaven, whence he will return to judge all at the End.  Many Quakers have felt very uncomfortable with this third aspect. The idea of an all-atoning sacrifice is essentially Jewish (the Gentile Luke rejects it, incidentally – he prefers to regard Jesus as providing the perfect example of a life lived for others and to God, for us to follow). Sacrifice ties in with early Christian ideas and the sacrament of the eucharist, but as I noted earlier Quakers reject sacraments. And of course many of us feel that atonement presents us with a truly horrific idea of God  – what sort of divinity worthy of worship demands to  be placated by the blood sacrifice of his beloved son? As for the resurrection itself so insistently proclaimed by the early church, particularly Paul, many Christians (not just Quakers!) are very unhappy with walking corpses who after their resuscitation eat meals with their friends before floating into heaven, leaving their followers gazing at their disappearing feet. Many prefer to see the resurrection much more as a metaphorical experience, which somehow convinced the early church that Jesus in some unique way lived on with his followers via his indwelling spirit, which was also the spirit of God.

It should come as no surprise that like the early church, Quakers  had problems tying all the various strands together. One group (the majority) tended to emphasise the second strand and focused on the co-existent and co-eternal  Light, but some concentrated instead on the Jesus of faith and early Christian dogma, replacing the Quaker emphasis on the guiding light of the Spirit within the individual with a focus on Biblical teaching and later Christian tradition. Most of us, I think, would feel that if we do this we betray what Quakerism is all about, but nevertheless it was the orthodox and accepted view in the 19th Century, and challenges to it caused bitter divisions in both the U.S. and the U.K. It should be remembered that in the early days of Quakerism, Barclay himself had perceived Scripture as secondary to the operation of the Spirit, and I think these days, most of us would agree. 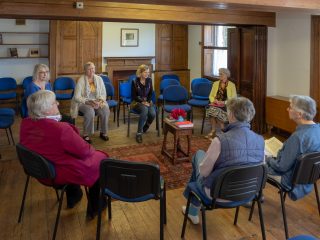